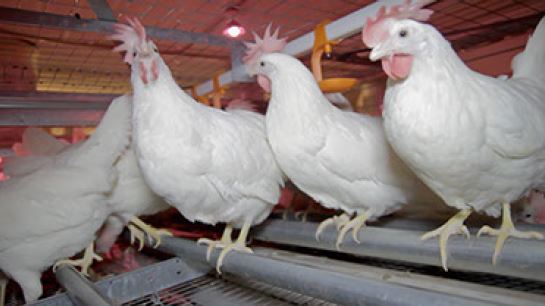 Imagine this: hearing “Canon in D” being played on repeat and seeing the lights change to match the hue and mood of the music in a barn.

An increasing number of chicken farms all around the world are serenading their animals as music not only helps to relax the animals, but also helps to boost production. Music is being used to calm chickens as farmers have found that less stressed chickens lay better eggs. This leads to bigger and more orange egg yolks which are almost twice the size found in current eggs. Music also enhances the growth of chickens; they grow larger faster, and develop better tasting meat.

In Jiangsu province, China, poultry farmers are experimenting with different genres of music to produce quality meat. Some farmers play Chinese classical music produced by musical instruments like guzheng and suona before feeding their chickens. Music coming from these two instruments aids to develop healthy chicken spleens and lungs.

The farm animals are introduced to music when they are a few days old. As they grow accustomed to the music, it is observed that the chickens are genuinely fond of the music. They even show a preference of different types of rhythms on different days.

Over on the other side of the world in the United Kingdom, the same method has been implemented on farm chickens. Many farmers tested the music theory and their results supported the theory that music does raise the quality of chickens.

Eggs produced while chickens listened to classical music were significantly bigger and heavier than those that did not listen to music. In fact, the jumbo egg cartons used were too small for the ‘classical’ eggs to fit in.

In New Zealand, the Yealands Wine Estate’s resident bird expert claimed that there is a 19 per cent difference in the weight of the eggs. According to the estate, eggs produced in hen houses with no music played tend to weigh 52 grams each, while eggs laid in the house with classical music were closer to 62 grams each.

Be it classical works such as Mozart, or Chinese classical Suona or Guzheng music, it has been noted that this has a more calming effect on them than rock music.