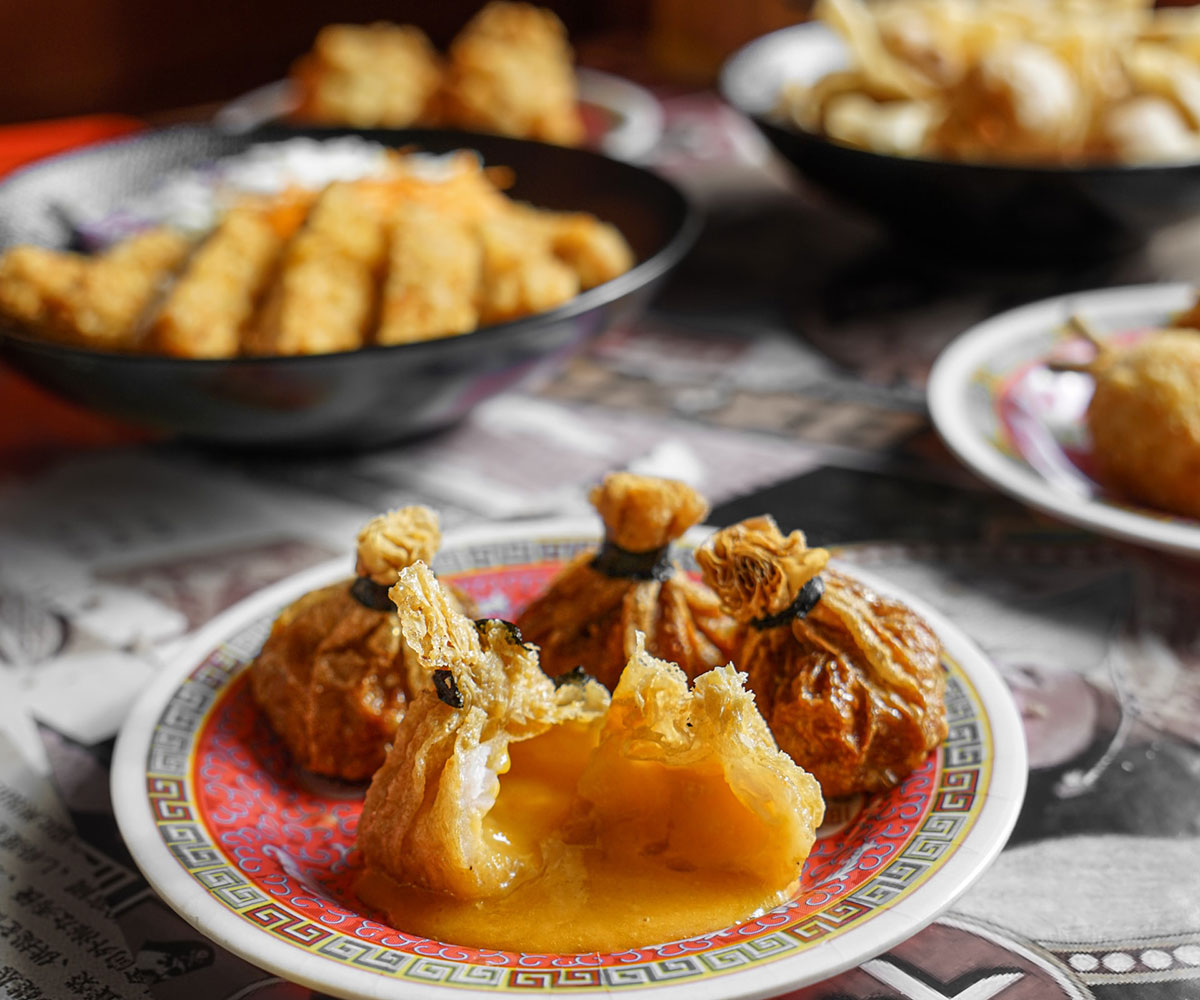 Plates of fried items are just as popular as the steamed dishes. (Photo: Mulan Sukrisno)
2021

Yum Cha literally means “Drink Tea” in Cantonese, one of the many Chinese spoken dialects. It refers to a late-morning or early-afternoon meal.

Yum Cha is a dining experience which involves drinking loose-leaf Chinese tea and Dim Sum. Dim Sum are small portions of food served at Yum Cha restaurants, usually in bamboo steamer-baskets. When you think of “Dim Sum,” dumplings come to mind for most. It actually refers to any of these small dishes and snacks served in this manner (like Spanish tapas), which accompanies the tea. Yum Cha is really a combination of tea and Dim Sum.

An integral part of Chinese culture, Yum Cha came from the Guandong Province, before making its way to Hong Kong and Macau. These days, you can find Yum Cha restaurants in any city with a sizable Chinese population around the world. It’s a fun way to eat and catch up with friends and family. And by the way, Yum Cha is not just reserved for mid-morning and afternoon tea. It’s now quite the norm to indulge in this meal at early evening dinners.

Ordering a meal at traditional Dim Sum restaurants is a fun and delightful experience. Push carts on wheels roll out of kitchens filled with stacks of steamer-baskets and plates of fried food as waiters weave their way through each dining table. At any time, you can flag down the trolley and select the food as it rolls by. Waiters will tick off items of your choice from the checklist on the menu – and place them on the table. You can also mark the items yourself and pass it on to the waiter. To accompany the meal, you get to choose from a range of teas like Black, Chrysanthemum, Jasmine and Oolong. 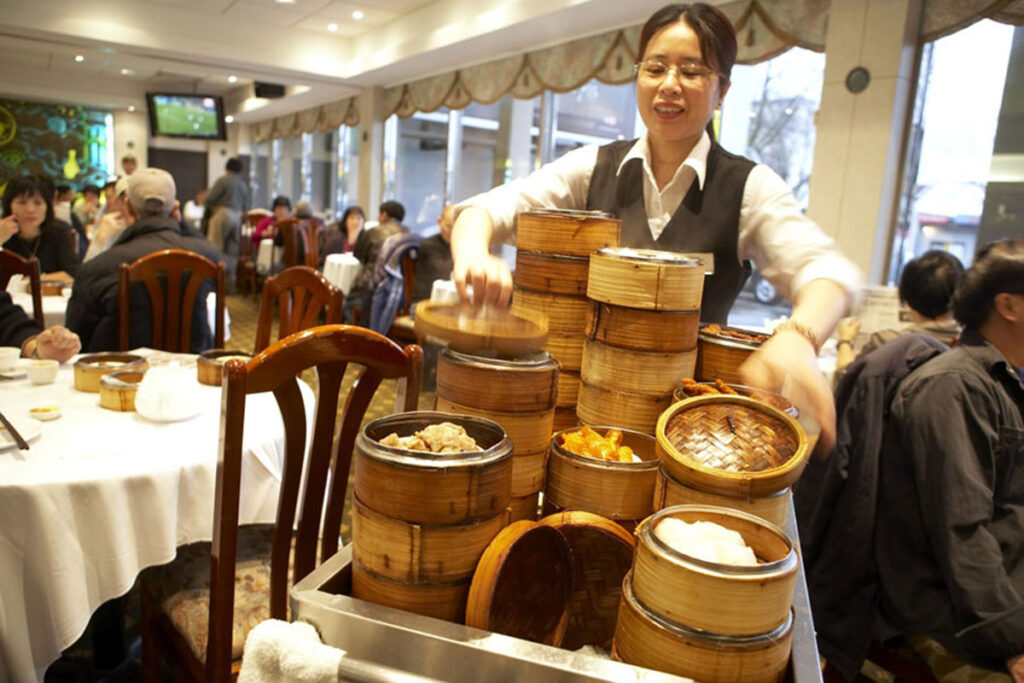 From the kitchen to the table, stacks of steamer-baskets with Dim Sum. (Photo: Discover SG)

Dim sum dishes include an assortment of seafood, meat, and vegetable dishes, prepared in various ways: steamed, fried or baked. Here are some staples you’ll find on the menu:

Har Gao: Chunks of shrimp encased in a thin translucent or ‘crystal’ dumpling wrapper and served in a bamboo steamer.

Siu Mai: Thin, open steamed dumplings usually filled with pork, shrimp, or a combination of both. You’ll find small amounts of bamboo shoots, black mushrooms, or water chestnuts as part of the filling. The steam dumplings also come with chicken filling, as a Halal option. 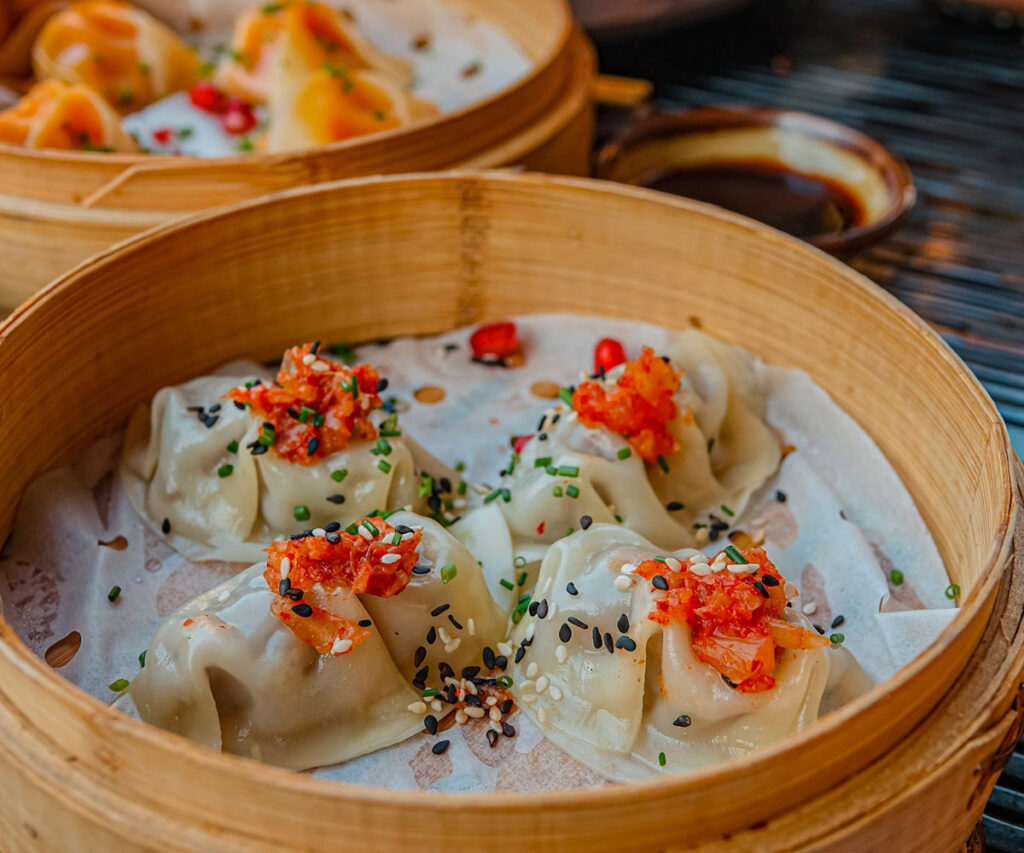 Feng Zhua (Chicken Feet): This dim-sum specialty, translated from Chinese, means “phoenix claws”. The chicken feet, which are served intact, are deep-fried, and stewed in a savory sauce. While there’s not much meat here, it is prized for its flavorful gelatinous skin.

Máhtàihgōu : (Water Chestnut Cake): Served either steamed or pan fried, the cake is soft, springy and not too sweet.

Cheung Fun: Otherwise known as rice noodle rolls, this typically handmade, steamed rice noodles are rolled around ingredients such as shrimp, vegetables or meat. They are best eaten with a drizzle of soy sauce.

Egg Tart: Sweet and rich, this custard-filled flaky pastry tartlets originated in Macau. The filling is a mix of sugar, eggs, and vanilla, which gives the creamy dish its signature flavor. And the list goes on – there’re just too many items to mention.

You’ll have to try them all. Get your friends together and go Yum Cha!