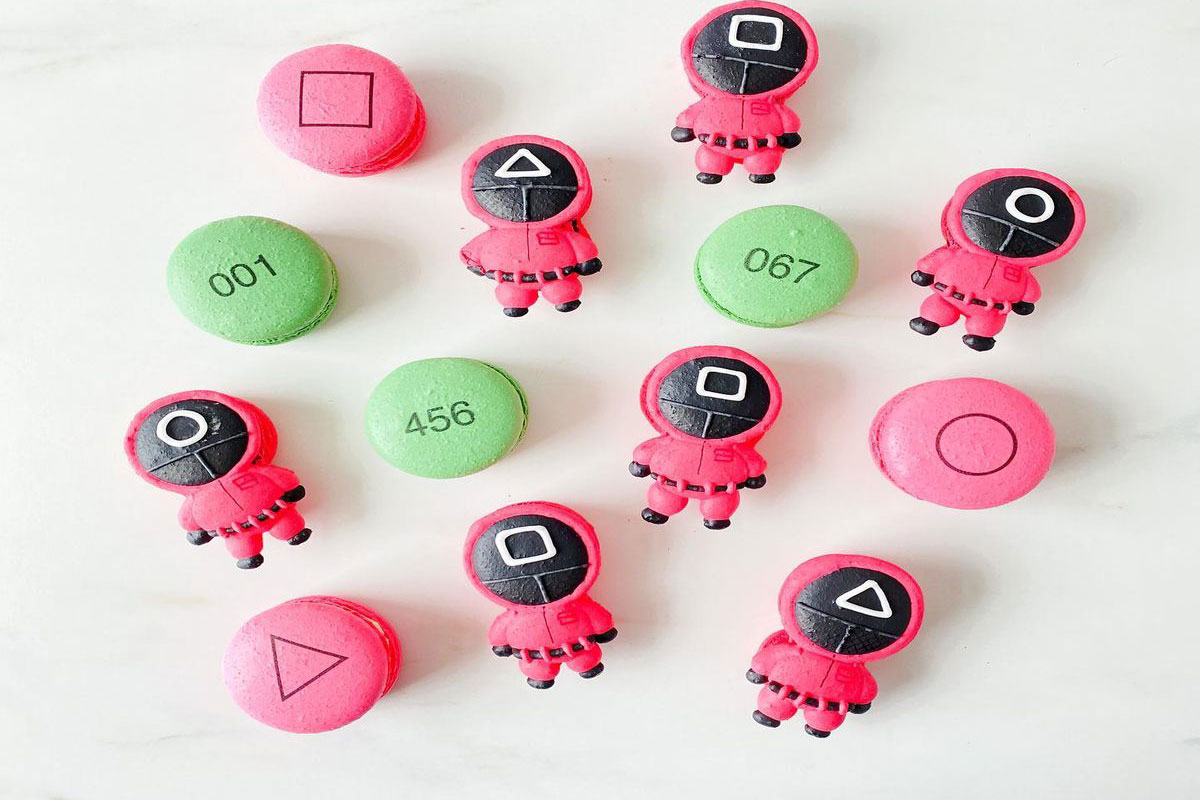 Topping the charts in 94 countries, Squid Game, the fictional drama from South Korea, has become Netflix’s biggest and most popular title ever. The dystopian series captivates its audience with an intriguing story exploring South Korea’s debt crisis, social inequalities, financial disparities, and the nation’s complex relationship with gambling. In the series, cash-strapped contestants participate in a deadly contest where they play children’s games to win a cash prize of up to 45.6 billion won. Since its release, Squid Game has already garnered over 111 million views and has become the first ever Korean series to reach the No.1 spot in America.

However, the hype for the internationally renowned series is no less in Asia – so much so that it has inspired a new wave of “Squid Game” dishes, merchandise and marketing strategies. Struggling to keep their doors open during the ever-so-changing COVID-19 measures, many business owners are banking on the show to increase footfall and publicity.

Etch A Sketch: Recreating the iconic Korean childhood game, Brown Butter café in Singapore gained its hype through TikTok, when consumers started sharing the honeycomb challenge. To play the game, customers must etch out the shape (either a heart, star or circle) given to them in a crisp honeycomb stencil, without any breakage in under two minutes. The honeycomb stencil is made by melting sugar and combining it with baking soda. The mixture is then poured on a silicone mat, flattened, imprinted with a shape mold and left to cool. If contestants succeed, they are awarded a free iced latte or a slice of lemon cheesecake. The ‘survival’ game has gained an overwhelming response from customers resulting in the café producing about 200 honeycomb stencil candies daily. 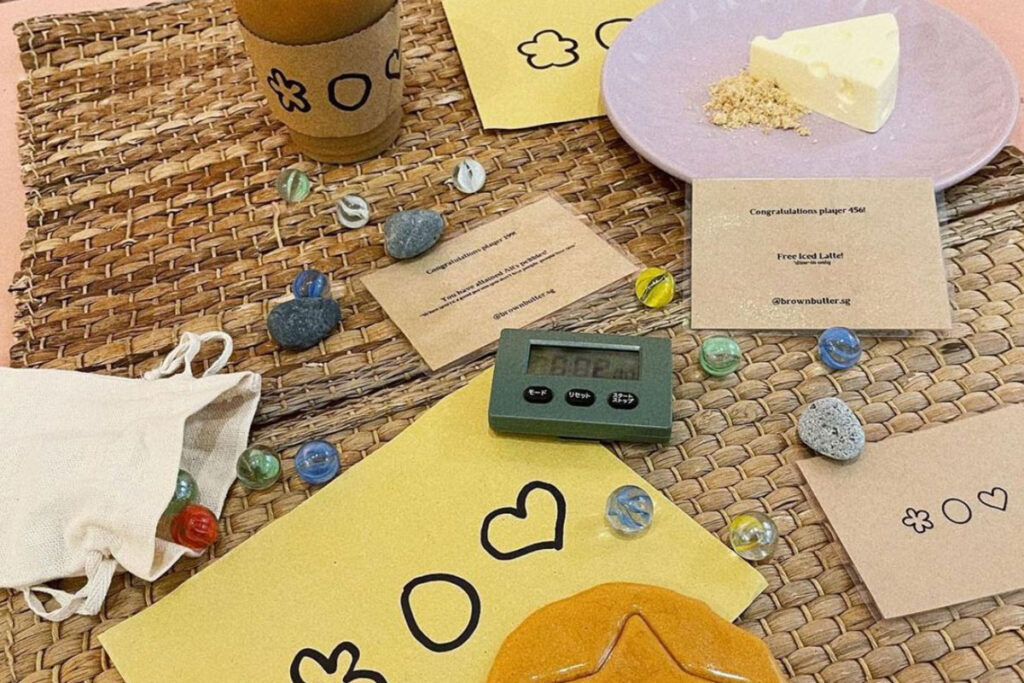 At Brown Butter, customers can etch out shapes from stencils made with delicate honeycomb candy. (Photo: Vulcan Post)

Deadly Sweet Treats: Annabella Patisserie has launched a new set of Squid Game-inspired macarons. The box set comes with six macarons in two flavors (Black Sesame and Houjicha) and colours (pink and green). The colors of the macarons match the green tracksuits worn by the contestants and pink uniforms worn by officers. According to the Director of the Halal-certified patisserie, the macaron set is limited to only 456 boxes (the total number of players in Squid Game). Local churro brand, Chulop! also hopped on to the bandwagon with its Squid Game theme colored marketing and advertising campaigns.

Red Light, Green Light: In Indonesia, Cafe Strawberry is using the series-themed marketing in its pandemic recovery by recreating some of the games from the television series in its space. In a dark room with neon lights, patrons can play the famous ‘Red Light, Green Light’ playground game, surrounded by staff dressed as the ominous hooded and masked guards, holding toy guns. The café draws more than 200 customers each day who are game to immerse themselves in unique experiences.

Post-Game Snack: If you’re looking to refresh yourself after these exhausting games, why not reward yourself with a post-game treat? All you need for this simple and uncomplicated treat is a hard boiled egg and an ice-cold cider – easily available in any household! 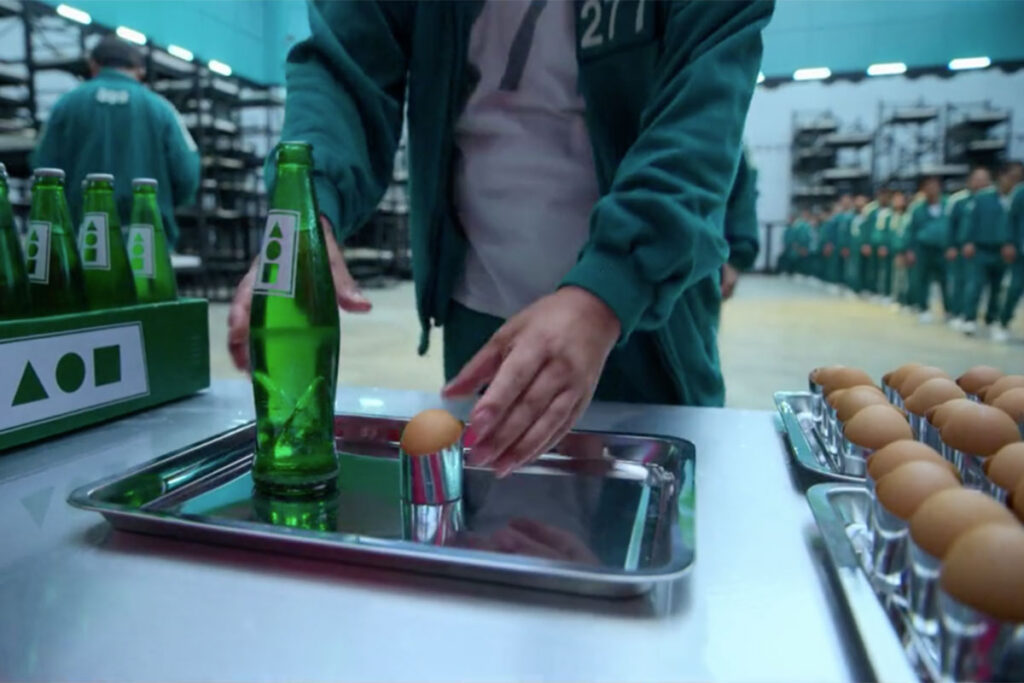 Reward yourself with a post-game serving of hardboiled eggs and cider, as seen on TV. (Photo: Netflix)