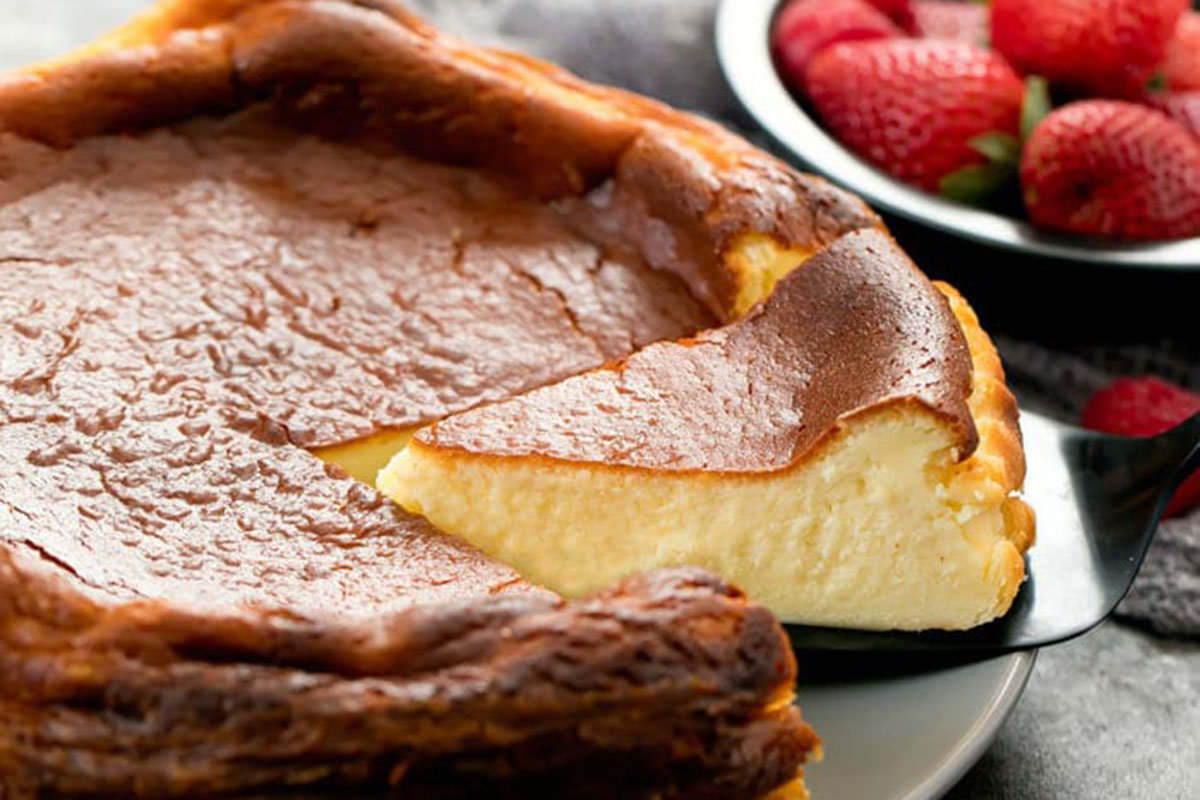 Silky smooth, tasty and oh so creamy! Whether it is the melt-in-the-mouth texture or airy and lightweight soufflé, cheesecakes are the classic dinner party dessert. An interesting fact that many are unaware of is that the cheesecake, usually perceived as a cake, is actually a form of pie. This is because cheesecakes are unleavened and have a crust, unlike typical cakes.

Given the popularity of New York, Philadelphia, and Chicago-style cheesecakes, it is often speculated that the cheesecake originated in the U.S. However, the dessert favorite dates to ancient Greece during 2000 BC. Made with a combination of cheese, flour, wheat, and honey, the first written recipe for cheesecake was found in the writings of Greek author, Athenaeus. Considered a good source of energy, cheesecakes were served to athletes at the very first Olympic Games and at Greek weddings. After the Romans conquered Greece, cheesecakes were also mentioned in Marcus Porcius Cato’s De re Rustica, one of the oldest surviving works of Latin prose. In the text, the author described making the Roman variation known as ‘Libuma’. With the expansion of the Roman Empire, the cheesecake then made its way across the globe. 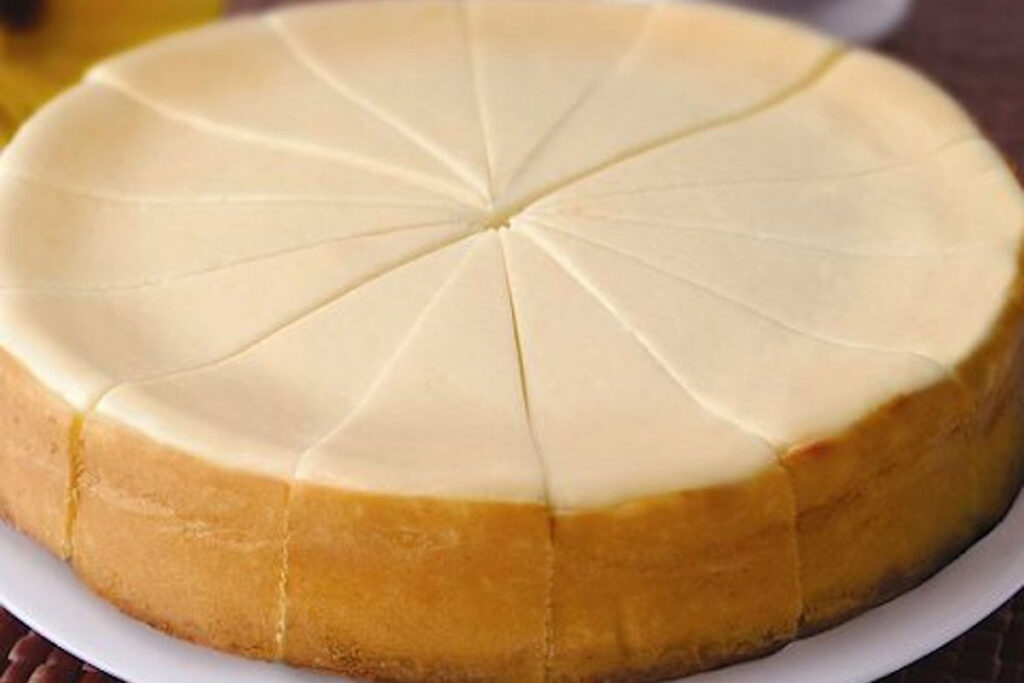 The Cheesecake was first created on the Greek island of Samos. (Photo: The Pappas Post)

Cream cheese, a crucial ingredient in the modern cheesecake, was not introduced until the dessert reached the U.S. While experimenting, famous sandwich-maker Arnold Reuben, used a cream cheese base, giving birth to the legendary New York Cheesecake. This version incorporates heavy cream or sour cream while its distinctive dense, smooth, and creamy consistency comes from the extra egg yolks used in the mix. The Philadelphia Style Cheesecake, also known as the “Philly Cheesecake”, is believed to have a lot more flavor and a super light texture compared to the New York-style cheesecake. Much to anyone’s surprise, this version gets its name from the branded cream cheese used, that is Philadelphia Cream Cheese and has nothing to do with the city of Philadelphia. On the other hand, the Chicago cheesecake is a baked cream-cheese version. This adaptation is relatively fluffy in texture and has a crust made from crushed shortbread, sugar and butter.

Today, cheesecake recreations can be found in various flavors and come with toppings like fruit, nuts and candy.

Nominated as “The Flavor of the Year” for 2021 by the New York Times, the demand for the Basque burnt cheesecake reached fever pitch in 2020, especially in Singapore when the pandemic lockdown first set in. The Basque burnt cheesecake was first invented 30 years ago in San Sebastian, Spain and is now found in every nook and cranny in Singapore. As the demand for cheesecakes continue to soar in the nation, new recreations have emerged with extraordinary flavors like pizza, dragon fruit, berries, Oreo, coconut, green tea and strawberry tofu. These aesthetically pleasing cakes are very popular on Instagram and other socials.

In Malaysia, locally-flavored burnt cheesecakes are also gaining traction. Flavors like Red Bean, Gula Melaka, Pandan and Nasi Lemak have surfaced in the market. Dessert shop, Le Bons 9 offers a unique combination of the chewiness of the Cendol (an iced sweet dessert), and the light texture of the burnt cheesecake in their Cendol Burnt Cheesecake. The Legasea Bakery has secured exclusive distribution rights to import the coveted desserts directly from American restaurant and distributor, The Cheesecake Factory. On the menu are classics like Key Lime Pie, Red Velvet and Raspberry Swirl flavored cheesecakes.

Cheesecakes in the Philippines are typically purple in color, thanks to the central ingredient known as Ube, a bright purple yam. To make the no-bake Filipino dessert, Ube is first boiled and mashed into a standalone sweet known as Ube Halaya, and mixed with cream cheese, vanilla, and condensed milk. The purple concoction is then spread onto graham crackers or cookie crusts and served cold. Meanwhile, to make the baked version, just add eggs to the batter. 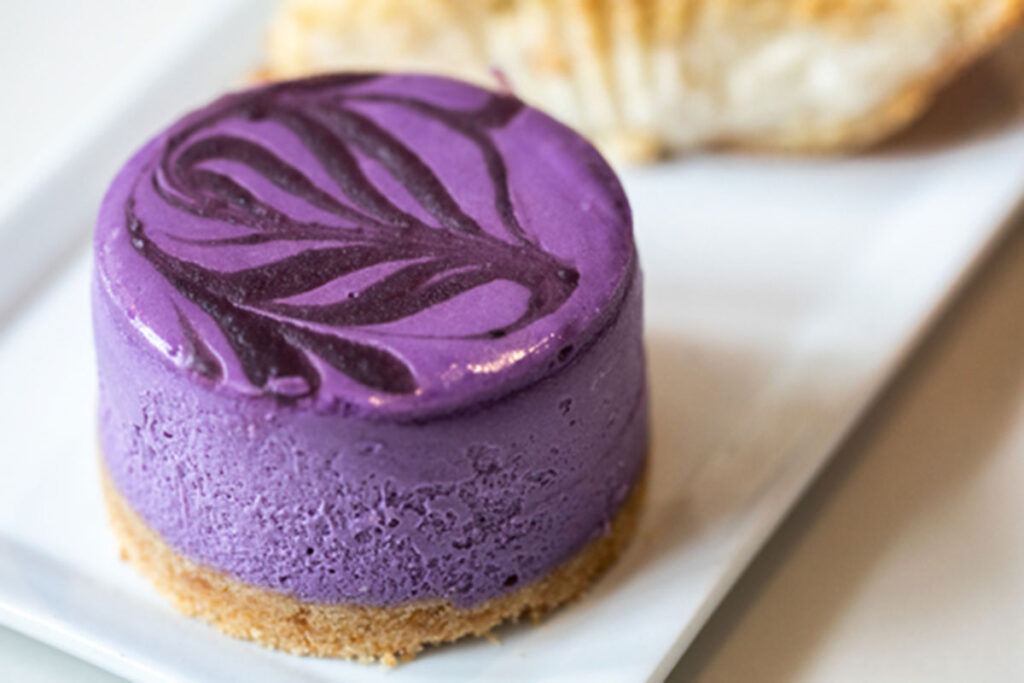 Ube Cheesecake – firm on the outside, soft and creamy on the inside. (Photo: Star Chefs)

As the dessert makes its debut in new regions, new renditions like the Japanese Souffle, Ricotta, Swedish and Russian Cheesecakes are popping up. Many are also looking to new ways to make the desert with ingredients like powdered and liquid eggs instead of shell eggs. These eggs have a longer shelf life and are mess-free.