Do you know that Thanksgiving Day is the busiest travel day of the year? That’s because people tend to spend quality time with their close friends and family members. Some live far away from their families, and would take buses, trains, and flights to spend the extended holiday weekend with loved ones. 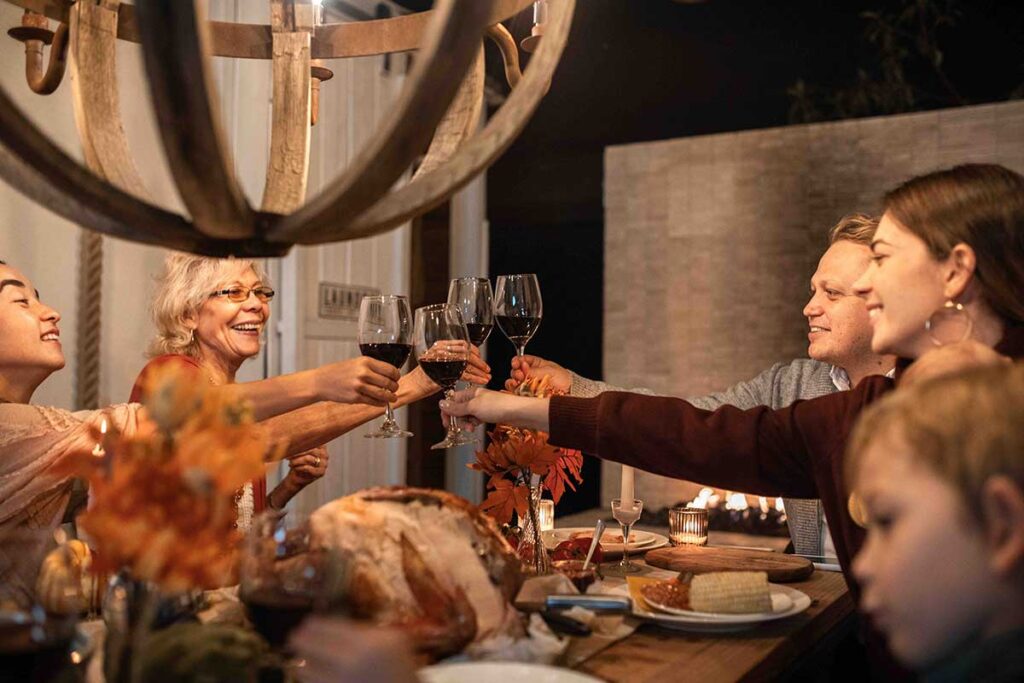 Families travel for miles to spend the holiday weekend together. (Photo: Rodnae Productions)

What’s in the Feast?

The American holiday is mostly about feasting and spending time together. The traditional thanksgiving meal is about the seasonal dishes such as roast turkey with stuffing, mashed potatoes, pumpkin pies, and cranberry sauce. It’s quite a filling meal but it’s more than just getting stuffed. Turkey contains tryptophan – an amino acid that can have a somnolent effect. However, some studies point to the carbohydrate-rich side dishes and desserts as being responsible for the tryptophan entering the brain. This is why people tend to take a nap after the meal!

In the old days, seasonal fruit and vegetables of autumn were used to complement the feast. Local veggies like lettuce, carrots, beans, onions, cabbage, spinach, onions, and corn were eaten by people. These have now been replaced by mashed potatoes. For this side dish, potatoes are boiled and then mashed along with salt, pepper, olive oil, unsalted butter, heavy cream, and some chives. Another favorite is Green Bean Casserole made with green beans, salt, unsalted butter, Italian bread, chives, thyme, rosemary, grated parmesan, olive oil, mushrooms, onions, and heavy cream.

One item that’s an integral part of the traditional turkey roast is cranberry sauce of course! This is made with freshly washed and dried cranberries which are mixed with sugar, water, cinnamon stick, allspice, orange zest, orange juice, and nutmeg. Another popular side dish is cornbread prepared with cornmeal and all-purpose flour along with other baking ingredients.

Butternut Squash Soup is the perfect start to the Thanksgiving meal. The wonderful soup is made from butternut squash along with unsalted butter, salt, white pepper, honey, chicken broth, minced ginger, heavy cream, and nutmeg. 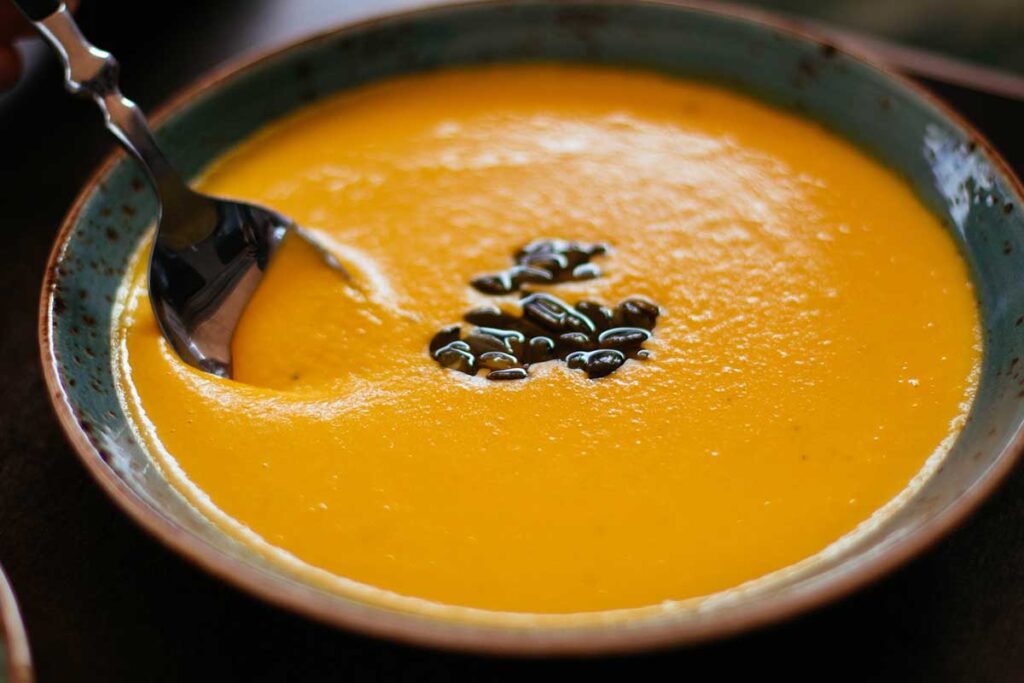 Nothing like a bowl of warm Butternut Squash Soup to start off the Thanksgiving meal. (Photo: Valeria Boltneva)

The dessert of the day is Pumpkin Pie, made with pumpkin puree, dark brown sugar, ground ginger, unsalted butter, cookies, half and half, salt, nutmeg, and eggs. 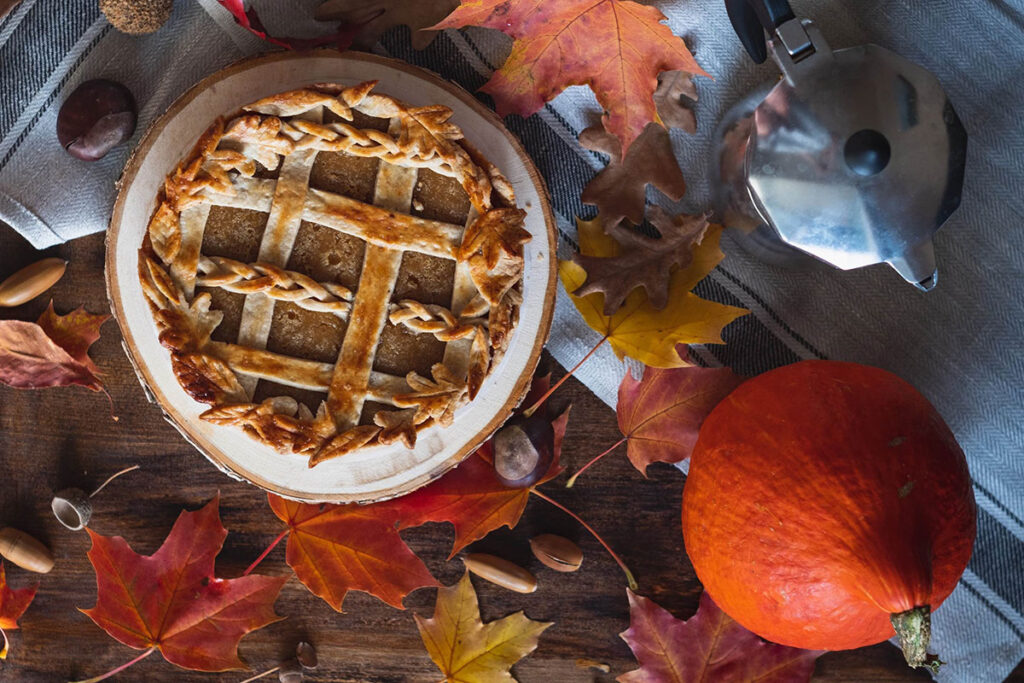 This year, Thanksgiving Day falls on November 25. While turkey is king, it has become more than a festive meat. In Singapore, U.S. turkey brands (including Halal options) are readily available in supermarkets, local butcheries and online, all year round. You can buy frozen whole turkey (approximately 4.5 kg) to make a roast, or turkey parts to suit local dishes. The supermarkets also offer ready-to-eat turkey, and you’ll just need to reheat the bird and serve. And, if you’re pressed for time, specialty groceries offer turkeys imported from the U.S., which are roasted and chilled. All you need to do is to reheat the turkey with the instructions that come with your order. 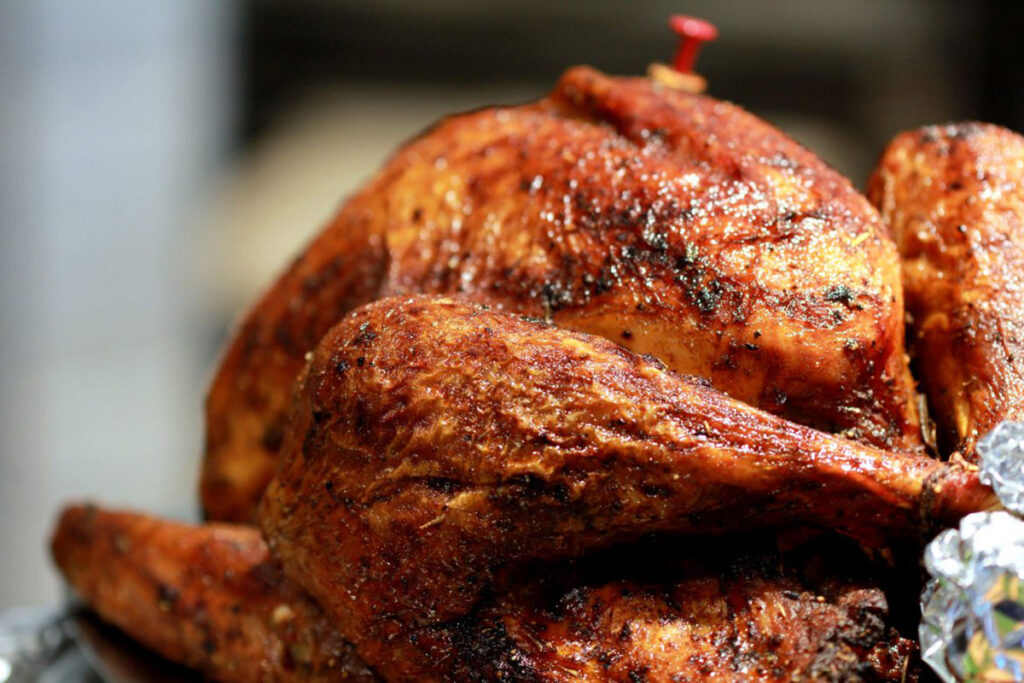 You can find Halal roast turkey at local supermarkets and butcheries.

Whether you prefer your turkey in traditional or contemporary flavors, you will be spoilt for choice this Thanksgiving!