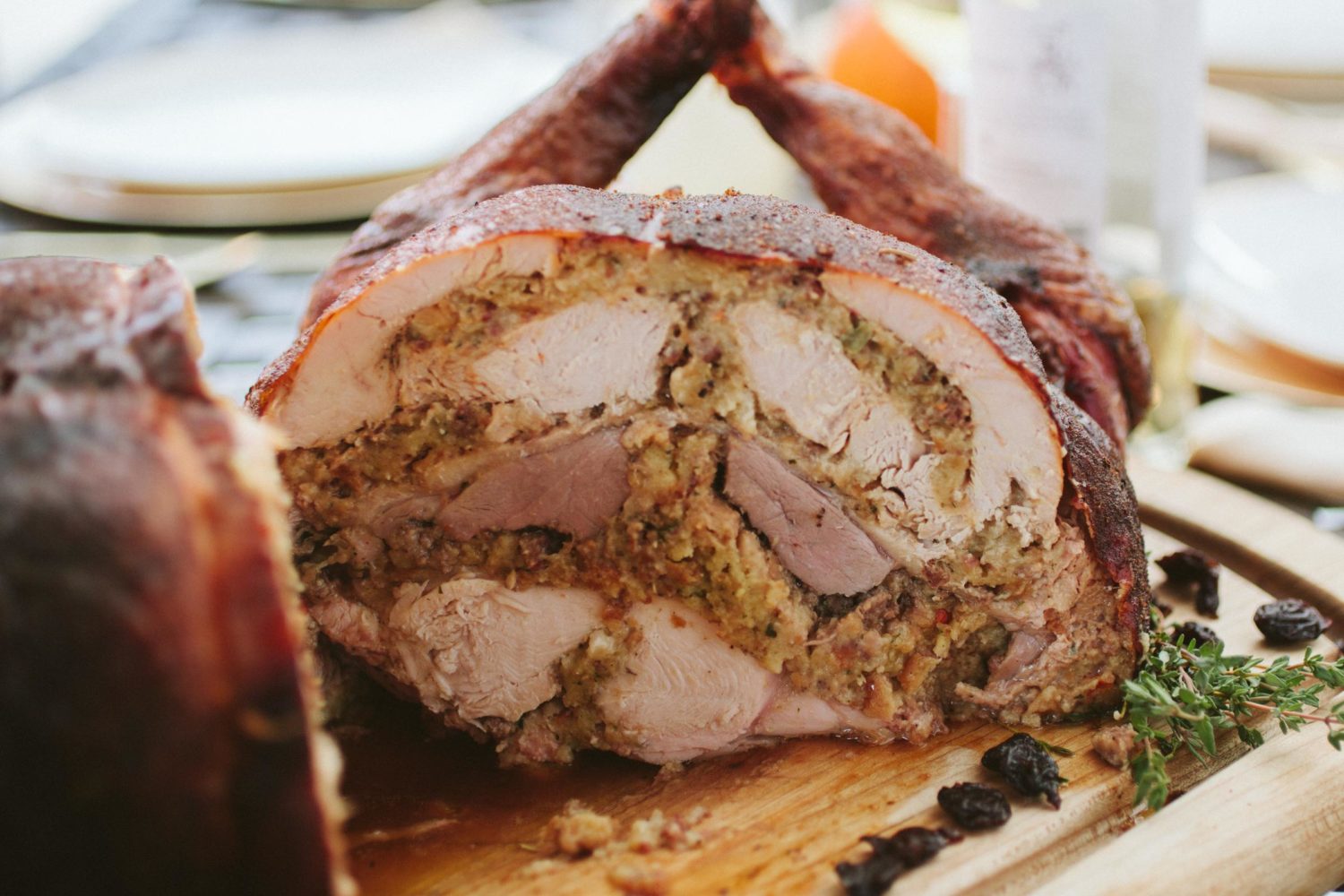 This is what a carved Turducken looks like. (Photo: Kiss The Cook)
2022

How about all three!

In a nutshell, a turducken is a chicken stuffed into a duck stuffed into a turkey. While this may sound like a bizarre, over-the-top food trend, stuffed meat dishes like the turducken have been part of a long history of engastration, a culinary tradition of stuffing and cooking one animal inside another.

Engastration can be found in food journals as early as 1807 in a food journal published by Alexandre Balthazar Laurent Grimod de la Reyniere, where one of the recipes called for 17 birds to be stuffed into one another and roasted. Back in 18th and 19th century Europe, stuffing meat inside of other meats was a way to show off one’s wealth and impress guests. In 20th-century Louisiana, the late Cajun chef Paul Prudhomme claimed to have invented the turducken and even trademarked the name in 1986.

Part of the appeal for animal-stuffed-animal roasts is the surprise. A perfect turducken should arrive at the table looking just like a regular old turkey. It is only upon carving that guests are given the first clue: rather than trying to navigate the confounding curves of a breastbone, a carving knife slides cleanly, exposing the boneless, layered meat and stuffing within. 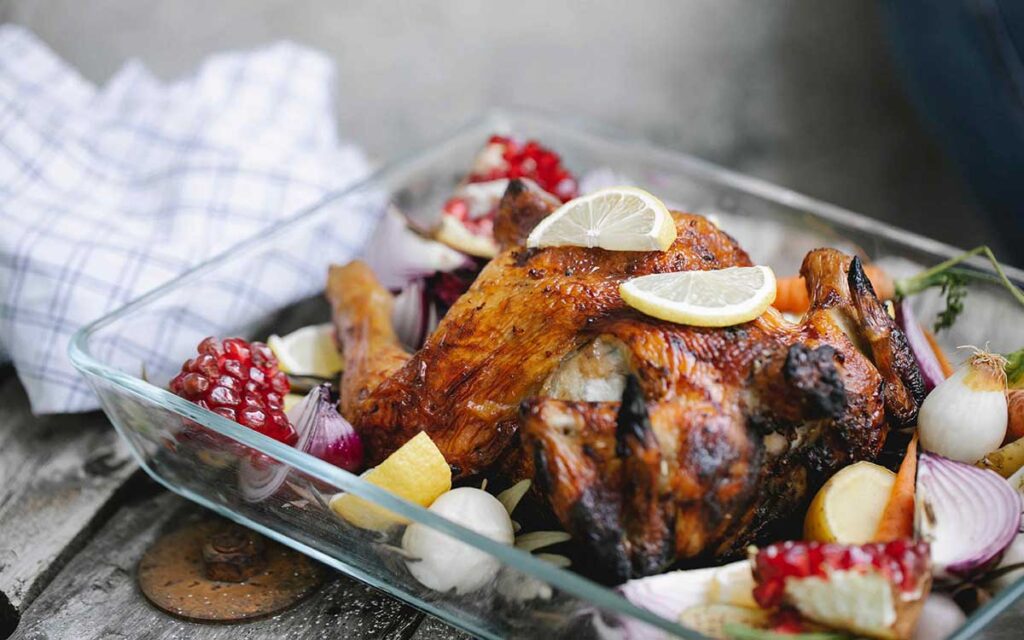 A perfect turducken, from the outside, should look like a regular turkey. (Photo: Tim Douglas)

Achieving a perfect, juicy, and tender turducken is not an easy feat, given the sheer size of the dish. So, before you even get started on replicating this large western delicacy, here are a few prepping and cooking tips to take note of.

Debone the birds: The most difficult part of a turducken is deboning out all three birds. With the chicken and the duck, this means removing the wishbone, backbone, and cutting the joints at the wings and thighs while still keeping the skin intact. For turkey, do not remove the leg and wing bones. If this seems like an impossible task, ask your local butcher to debone the birds for you.

While chicken and duck are totally deboned, turkey is only partially deboned.

Choose the right stuffing: Between each bird in the turducken holds a layer of stuffing to add a depth of flavor to the dish. It is important to pick ingredients that pair well with all three birds and support the structural integrity of the roast meat. While meat is made of strongly interconnected proteins that set into shape as you cook them, stuffing has no such shape-holding power. Even in a fully roasted turducken, stuffing is soft and malleable, causing the bird to deform and look unattractive as it spills out onto the cutting board upon carving. Instead of the go-to cornbread studding, choose all-meat stuffings like sweet sage sausage, andouille sausage or Italian sausage. Remember to not overstuff – no one wants stuffing overflowing the turducken as it roasts in the oven.

Pre-cook the chicken: Cooking a turducken is not as simple as roasting raw whole chicken, duck, and turkey in the oven. A lot of things can go wrong with this cooking method – uneven doneness of each bird, raw chicken, or overcooked and dry turkey meat. So, before you stuff your chicken into the duck meat, poach, sous-vide, or pan sear it until reaches an internal temperature of 62°C on an instant read thermometer.

Render the duck fat: Compared to chicken and turkey, ducks have a large layer of fat in between its skin and meat. If not rendered properly, it stays rubbery, fatty, and unappetizing. The key to getting rid of this unappetizing texture is to pan sear the duck, skin side down, in a skillet for fifteen minutes or until the skin turns brown.

Roasting the turducken: Once all of the ingredients are stuffed into the turkey, you are left with the final and perhaps the easiest step. Place the turducken onto a roasting rack with a pan underneath to catch drippings. Roast it in a 190oC oven for about 1 hour and 30 minutes until golden brown, or until the turkey breast meat registers at least 65°C on an instant read thermometer, and thighs register at least 73°C.

This dish is not an easy project, and there is a high possibility that you’ll not get it right on the first trial. It may take a bit of practice to get it right but nail this dish, and it’s sure to be a hit!